Advice on how to control nuisance aquatic plants

Invasive alien pond plants are a major threat to the UK aquatic biodiversity.  They are taking over rivers, streams, canals, lakes and garden ponds.  You can help by removing and destroying these nuisance species.

This plant is from North America but has caused problems in South Africa, Australia and Europe.  Dense mats of Azolla can can completely cover the water surface to a depth of 15cm or more.   These are a serious danger to children, pets and livestock which may mistake the mat for a firm grass surface.   The dense cover reduces the light beneath the surface, killing submerged plants and fish.   The plant can be sucked into water intakes, blocking pumps and filters and can mat together forming floating rafts which cause flow problems and obstructions to weirs and locks, creating flood risks.

A floating aquatic fern, it is most frequent in ponds, lakes, canals, ditches and slow flowing rivers.   It will also occur in seepages and in the backwaters of rivers and streams with faster flow but is rarely abundant in these habitats.   It forms floating rosettes up to a few centimetres diameter which are composed of branched fronds with rows of imbricate leaves covered with dense papillae.   It has a very fast growth and is capable of spreading over lake surfaces to form a complete coverage in a matter of months.   It is initially green, and becomes a striking, red-brick red late in the season.

It reproduces vegetatively by budding and sexually by producing spores.    These spores are released into water, settle on the bottom and start to grow the following spring.

Control advice:  The best method of getting rid of it is to keep scooping it off the water and adding it to the compost heap.   It locks in nitrogen and makes very good compost. 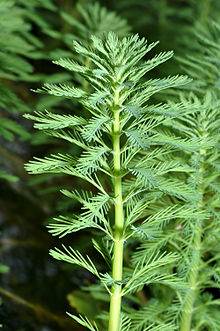 Originally from South America, Parrot’s Feather is widely available and has taken over about 150 sites in the UK.   It grows so quickly that it can cover large ponds within a year.   Although it looks very pretty, this plant and all other non-native Myriophyllum species cause enormous problems in ponds, canals, lakes and reservoirs.   Growing rapidly over the water surface, killing underlying plants and removing oxygen from the water.   This can cause the death of insects, fish, frogs, toads and newts, reducing the biodiversity in ponds and making them poor habitats for natural pond life.

The emergent stems and leaves are the most distinctive trait of Parrot Feather, as they can grow up to a foot above the water surface and look almost like small fir trees.   The woody emergent stems grow over 5 feet long and will extend to the bank and shore.   Attached to the Parrot Feather are pinkish-white flowers that extend approximately 1/16 inches long.

It can seriously change the physical and chemical characteristics of lakes and streams.   The Parrot Feather grows abundantly, shades out naturally occurring algae and clogs irrigation ducts and canals.   The Parrot Feather typically exist in bundles and extend out of the water.    In large numbers, the plants make a dense mat on the water’s surface. Because of this, they shade the water from sunlight and cause native plants to die because of light deficiency.   The organisms that feed on the native plants can die off due to starvation.   The dense mats also cause problems for recreation.   Swimmers and boat propellors can become entangled.   The mats are also a breeding ground for mosquitos.

In the United Kingdom, this plant is one of five introduced aquatic plants which were banned from sale from April 2014.   This is the first ban of its kind in the country.

Control advice: The plant is very difficult to control, being resistant to most herbicides and shading.   It is also spread around by mechanical and manual efforts to control it.   If you have this plant, remove it, compost it, dry and burn or bury it.   Please do not throw it away or put it near ponds or streams.

Originally from America, Floating Pennywort has caused problems wherever it has been introduced (Chile, Australia, Holland and the UK) outside its native range, costing many thousands of pounds worth of damage.   Currently it has invaded about 80 sites in the UK.   This plant blocks waterways, causes flooding, chokes out all submerged and most bankside plants, prevents navigation and fishing, reduces insect biodiversity and is very difficult and expensive to control.

In garden centres it is often confused with the native Marsh Pennywort which has leaves that feel thick and waxy, are circular in outline and no bigger than 2cm across.   Floating Pennywort has leaves that are thinner, kidney-shaped with an indent at the base of the stem and can be up to 10cm across.   Good alternative plants are Frogbit, Water Mint, Water Cress and Marsh Marigold.

In the United Kingdom it is an invasive alien species which is currently spreading in waterways.    It was one of five aquatic plants which were banned from sale in the UK from April 2014, and was the first prohibition of its kind there.

Water Pennywort has stems that spread horizontally and can float on water.   Leaves grow on petioles (a stalk that attaches a leaf to the plant stem) up to 35 cm long, and are round to kidney-shaped, with 3–7 lobe.    Flowers are small, pale greenish white to pale yellow and come in clusters of 5–13.   Fruits are small dry fruit that can float, helping the seeds to disperse.

Control advice: If you have this plant, remove it, compost it, dry and burn or bury it.   Please do not throw it away or put it near ponds or streams.

Introduced to Britain from Tasmania in 1911, Crassula now occupies about 8,000 natural sites.   Found around damp margins or ponds and in water to a depth of 3cm, it appears as small light green tussocks, spreading rapidly to form dense, interwoven mats.  It grows over other aquatic vegetation, kills native plants and creates a poor, oxygen-depleted habitat for invertebrates and fish.  Crassula grows throughout the year with no apparent dormant period.   It is most easily spread by fragments that are produced by cutting and tearing; pieces as small as one node (5mm) can regrow, making colonisation and spread inevitable once established.   Often mislabelled as Tillaea recurveor Tillaea helmsii, Crassula has driven rare species to extinction in the UK and is threatening the remaining habitat of Starfruit and Hampshire Purslane.

The shoots are rather stiff, carrying narrow parallel-sided leaves in opposite pairs, each leaf being about 4–24 millimetres (0.16–0.94 in).   Small white flowers with four petals are produced in summer on long stalks arising from the upper leaf axils.   The flowers are always above water.

The plant grows on the muddy margins of ponds where it forms carpets with 100% cover, or semi-submerged in deeper water, or totally submerged with elongated stems.   It does not die back in winter.

Control advice: Mechanical cutting makes the problem worse and chemical control is only effective if applied correctly and often enough.  The best advice for small ponds is to not let this plant get out of control as it is much easier to remove it if there is only a little of it.   Pull it out by hand – this will need to be repeated for about two years.  You can also cover with thick black plastic sheeting for six months or fill in the pond and start again after two years.

Whatever your need, help is just a phone call away