May Plant of the Month: Lysimachia vulgaris

Plant of the Month

Yellow loosestrife is common throughout Britain and Ireland. 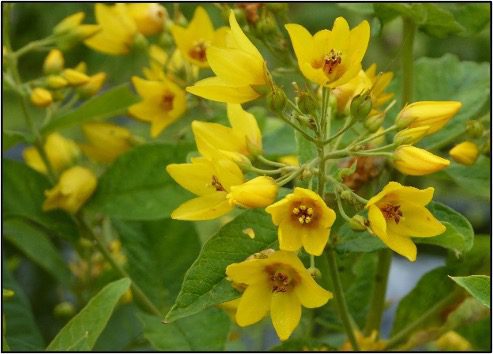 It’s a marginal plant that thrives very well in wet peaty soil beside rivers, lakes and marshes and almost any damp habitat during the summer months.

You can also find cultivated varieties which have stems packed with blooms in parks and gardens.

Their flowers resemble a pyramid shaped cluster and are cup shaped with five pointed yellow petals.

This is a late summer plant and has stunning yellow flowers which add a dash of bright colour when the rest of the surrounding blooming plants are dominated by blues and pinks.

Yellow loosestrife was tied around the necks of oxen to keep away the flies and in the very distant past it was used to rid houses of fly infestations.

The plants were dried and burned indoors and the toxins in the smoke drove out the flies (and probably the owners too!)

It’s also believed that King Lysimachus fed his oxen loosestrife plants to calm them down – as its name implies, loosestrife literally means to lose strife!

Sorry, the comment form is closed at this time.

Join us on LinkedIn